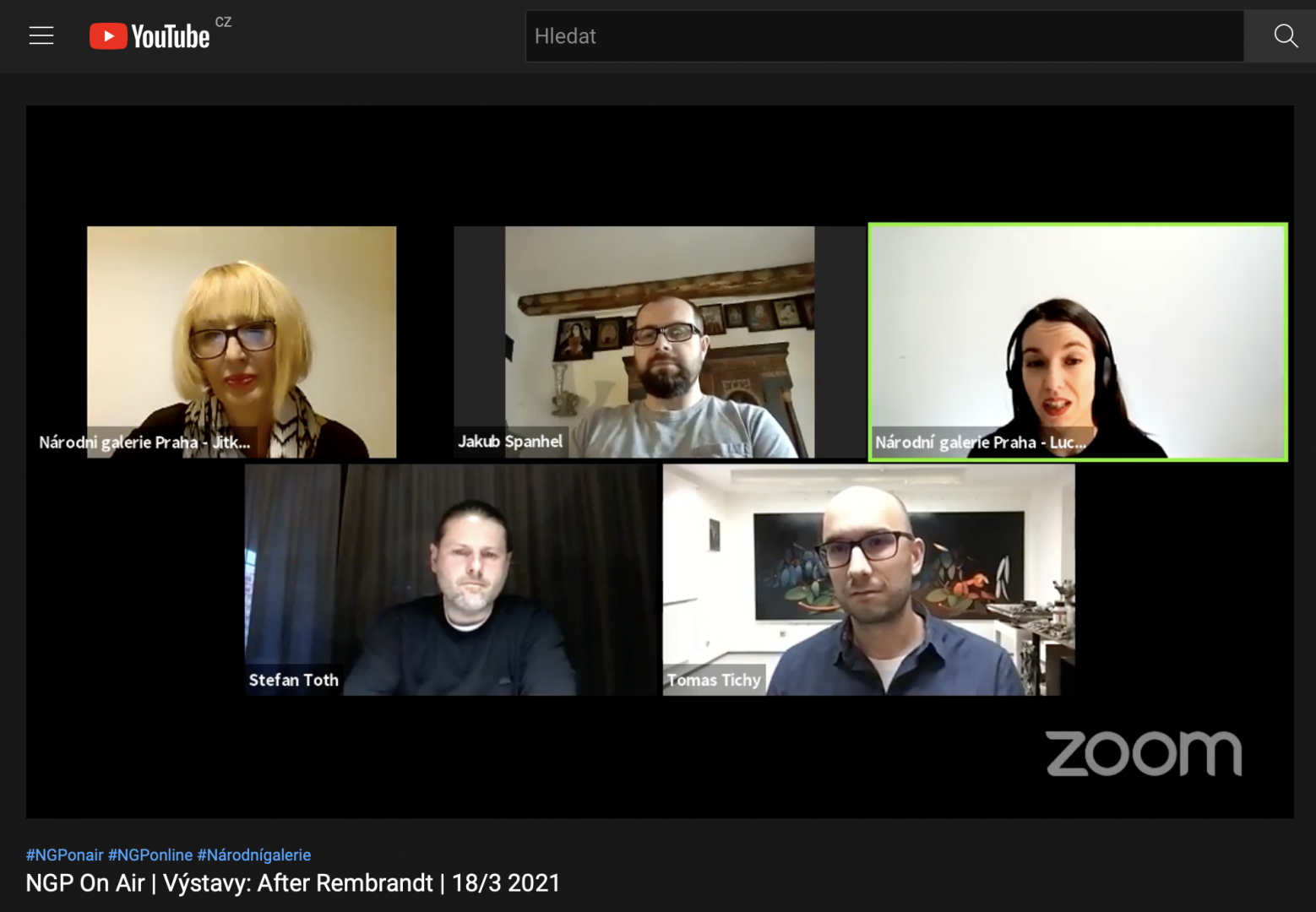 After Rembrandt, The National Gallery in Prague

Rembrandt’s painting The Scholar in His Study is accompanied by the project After Rembrandt, which presents the works of eight contemporary artists in turn (Štefan Tóth, Jakub Špaňhel, Vladimír Véla, Alžběta Josefy, Zdeněk Trs, Tomáš němec, Tomáš Tichý, Michaela Maupicová), created as an artistic reflection on Rembrandt’s painting. The paintings are displayed in an exhibition in the Sternberg Palace opposite Rembrandt’s work.

The reception (or appropriation) of the old masters is a standard phenomenon in art, and many well-known galleries have projects combining older art with contemporary art. The National Gallery in Prague not only looks for parallels in various periods of art, but directly initiates the creation of original reflections by contemporary artists and visitors on Gallery projects. Its aim is to demonstrate to the public that older art remains a source of inspiration for the new generation of artists, that it has potential and meaning for today’s world, and that it is not just a matter of artefacts preserved on the walls of exhibition halls.

Graduate of the Academy of Fine Arts in Prague (prof. K. Stretti), whose work is characterized by technical precision, based on inspiration old master's techniques. One of the bases of his work is a response and update of classical painting.

Palace of the Mind In my response to Rembrandt’s “A Scholar in His Study”, I decided to focus mainly on interpreting the topic of the painting. I asked myslef how we perceive education and memory, knowledge, in our world today.

We tend to rely more and more on storing our memories and data outside ourselves, in the belief that any information is always at hand and easy to find. However, this does not work unless we know what it is we are actually looking for.

The mythical “palace of the mind” has become a ruin, its chambers are shattered in chaotic vagueness and uncertainty. Our system of values lacks any strong pillars, despite the fact that our [traditional] values are so often used as an argument. Questioning any “greater truths”, the postmodern man lives in a seemingly free and open-minded society. At the same time, however, this is our greatest weakness. The palace lies in ruins, yet renewal is possible.

The Fortress exhibition at the Chemistry Gallery was part of the UAMO Festival in Munich.

Radio Interview regarding the Fortress Exhibition at The Chemistry Gallery

Short TV Interview regarding the Fortress Exhibition at The Chemistry Gallery

Interview regarding the Fortress Exhibition at The Chemistry Gallery

Tomas Tichy has been selected from 1,973 artists from across Europe and the UK to have their work shown in the 2016 Columbia Threadneedle Prize: Figurative Art Today.Now in its eighth edition, The Columbia Threadneedle Prize is Europe’s leading open competition for figurative and representational art and, at £20,000, one of the most valuable art prizes in the United Kingdom. The winner will also be awarded their own solo exhibition in the Threadneedle Space at Mall Galleries (valued at £10,000). The 2016 winner will be announced on 2 February 2016. Visitors to the London exhibition will also decide the Visitors’ Choice Award, worth an additional £10,000.A selection of the works from the London exhibition will also be taken to Italy for a further one-month exhibition at Palazzo Strozzi, Florence in June 2016.The Columbia Threadneedle Prize winner has been selected from 3,828 entries submitted from 29 countries by the following panel: